My fav film director Tim Burton is having his personal 1st big exhibition at MoMa(The Museum of Modern Art), in New York City from November 22, 2009 to April 26, 2010! SO exciting!

Tim Burton has always been my fav film director ever since his "Nightmare Before Christmas" in 1993. I still remember the impact of visional imagination, my professor in school and classmates at that time all rushed to movie theaters for it and we even bought the book of the film, and check out how did he make it and all the figures design.

I just love his creativity and the story, awesome!

It looks even great still now, after 17 years, right?

And for the past two decades he never let us down. He created a lot of good movies following. One of my fav is "Big Fish" which tells the affection between father and son. I always can't help to cry and cry in the end of the movie since I have the same affection between me and my dad. His movies though funny, crerative and even creppy sometimes, but deeply described the affection of mankind in his way.

I also admire he started from a cartoonist for Disney and all the way to now. You can see his imaginary world, and he is not just a film director but a artisit, painter, figure creator, and a cartoonist. You can see how I love about him from my previous essay "I love Tim Burton!" more about one of my another fav "Charlie and the Chocolate Factory"

And for his1st big exhibition at MoMa(The Museum of Modern Art), in New York City from November 22, 2009 to April 26, 2010.... I so wanna go but I don't I will have the time and budget to go to New York by end of April... aiya! But after I check his official website for this exibition, I bet you can see most of it on the website and no need to go in person to see best of it. I think the music of it is really cool too! 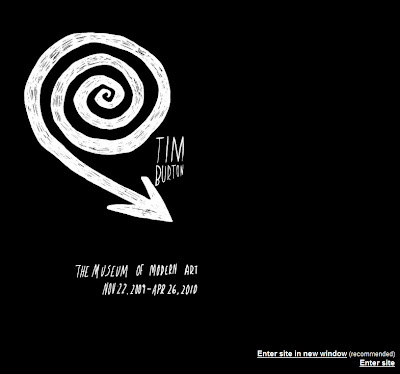 See how create the imaginary world behind the scenes. His talk, his team, the story of making films.... most important of all, his sketch and figures.
It's really an inspiry talk from Master Tim!

Now what I expect most is his "Alice in Wonderland" coming up in March! Let's wait and see his next surprise!